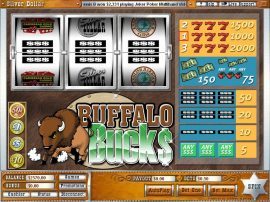 The Buffalo Bucks slot is a popular game developed by WGS gaming. The theme of the game is all about Buffalos. The 3 payline and 3 reel game ensures the players are always thriving to play this game whenever possible. With the game having amazing graphics, background animations and super realistic background music, the game is set to take your experience to the next level.

Buffalo Bucks Slot on the Go

Buffalo Bucks is a popular mobile compatible online casino game. The game is widely available in almost all the modern operating system for both free and paid versions.

Buffalo Bucks slot is a 3 reels game, which provides maximum 3 payouts. The highest prize, which can be won on this game is 2000 coins and even come with a positive RTP of 94.85%. These features ensure more potential players opting to play the game. This is one such slot machine game, which does not contain Wild Symbol, Scatter Symbols, Multipliers, jackpots and even no Bonus games. Yet this is a game, which is more challenging and the stake payout is on the higher side.
Buffalo Bucks slot game does not contain any Wild symbol in any forms. The symbols, which are present in the game are dollars, triple, single and double bars along with lucky red seven and cherries backing up the formation.
Buffalo Bucks slot also does not offer the Scatter Symbol. However, the autoplay feature is available, ensuring chances of hitting the symbol of Lucky red seven and thereby earning a good jackpot. The highest payout of 2000 coins can be earned in the game on forming combination with lucky red seven.

Buffalo Bucks slot is an old-fashioned classic slot machine game. Being a non-progressive game, it does not have all the features, which can be found in numerous games of this generation. The symbols in the game do a very simple clause of ensuring the rounds to proceed. There is one lucky red seven symbol, which ensures the jackpot prize gets activated. This is the actual key of winning higher prize money while playing this slot machine game. For having to gain better payouts, the players needs to land 3 single bars, double or triple bars. There is a cherry symbol, which increases the stake and winnings.
For 3 cash symbols, 150 coins are earned. For triple bars, the coins earned are 50 and for 3 double bars 20 coins are earned. Finally, 10 coins are earned for 3-single bars. There are a total of 9 winning formations in this game.

One response to “Buffalo Bucks”