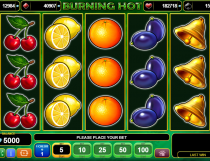 Powered by Euro Games Technology ‘Burning Hot’ is the perfect retro symbol slot with a combination of lucky symbols and fruity favorites.  It is essentially a fruit themed video slot.  The main symbols of the game are grapes, melons, stars, oranges, cherries, lemons, seven symbols, and shamrocks. It also has to scatter symbols of Dollar and a purple star.  Based on its former counterpart pub fruit machine, Burning Hot has five reels and five pay lines. It is based on the four-tier progressive jackpot prize, with a whopping 3,000 coins being paid out as the big win jackpot prize. This exciting slot can be played by all kinds of players. Choose from the plethora of credit bets and credit values to form a winning combination. 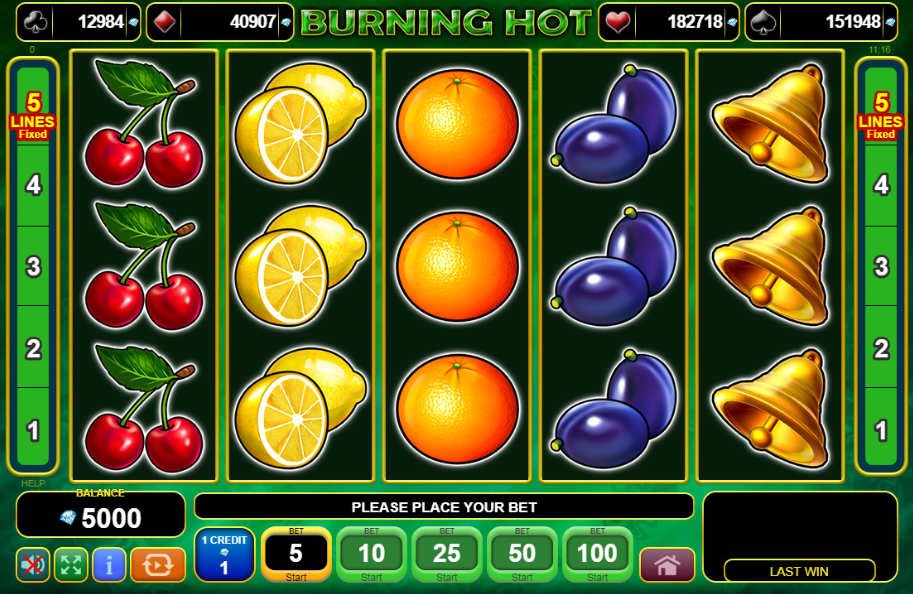 Play it Hot with EGT

Burning hot is ideal for slot players who seek pot hunting adventure over striking onscreen graphics. Players can win prizes ranging up to four-five figures on this fruity slot.  Each time a winning line is formed, the symbols burn into flames.  Players can score big wins from the very first spin. To initiate the gaming process the players should first fix a bet for each spin. Pressing ‘Start’ activates the play option and the ‘autoplay’ function forwards an uninterrupted spinning process.  Here’s a quick look at the winning combinations-

The Burning hot casino is a part of EGT’s Jackpot cards, it is based on a four-level mystery jackpot. Players can win any one of the 1st, 2nd, 3rd or 4th level jackpot once the jackpot game is triggered. The card suit starts at clubs then goes up to diamonds on the second level, followed by heart and spade on the third and fourth level. The four-tier progressive jackpot is also known as mystery jackpot. The bonus feature is activated randomly at the end of any round, players are taken to a new screen showing 12 faces down cards.  Reveal the four suit symbols by selecting a card one at a time. The progressive jackpot is paid out when one reveals 3 matching suit symbols associated with the suit of cards.  In Burning Hot scatter wins are multiplied by the total value of the bet and the line win gets multiplied with the bet value of the winning line.  The bets can be placed over five lines only, and the bet value starts at one per coin line for a wager of 5.00. The bet per line can be increased through 10, 25, 50 and 100.

Burning hot slot can be played on the go on your mobile, tablets, computers and laptops.  Play this fruity slot machine for free as it requires no download. If you are up for some pot hunting adventure play this game for real money as well. The game forwards simple card games and winning at it reveals the bonus of double-up game feature. With lucrative bonuses and big jackpot wins to offer, this game is popular among the regular slot players. Enjoy the classic retro theme of this fruity slot as you score big wins.