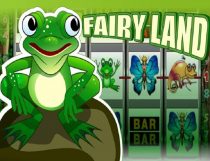 Igrosoft is a gambling software development company founded almost 20 years ago in Russia. Even though they were not involved in the online gambling industry from the very beginning, they soon realized how big the market was and immediately started making online games as well as the land-based ones. Fairy Land slot machine is one of the products Igrosoft team made in the series that has the elements of both real life machines and online slots. Considering that the game was made a while ago the graphics are outstanding while the betting interface is designed to look exactly like all the old-school tables.

The players are facing three rows, five reels and nine optional paylines in this game. Gamblers can choose between 1, 3, 5, 7 or 9 lines and the total stake increases along with the number of active lines.

Unlike some other Igrosoft products, this one does not have additional 3D animations in the background nor besides the reels. If you are interested in checking one that has those elements, Gnome by Igrosoft would be a great choice.

We all read and heard fairytales and legends when we were kinds, but some of that material is still interesting to this day. Igrosoft may be referring to the frog prince fairytale where he turns into a prince after a princess kisses him while he’s still a frog.

All symbol payouts and possible combinations are listed in the paytable. At least three matching signs on an active payline are required in order to get at least some return.

Besides substituting for all the regulars, the wild card also allows players to win up to 5000.00 credits when all five are combined. The game’s logo is representing the wild icon.

Keep in mind that some of the prizes might return less than 50% of the invested amount for a single round. For example, if a player bets 0.01 credits per line and only three slug icons are connected, that means that the difference between the investment and the winning is negative for the player. However, combinations like that often occur on more than one line providing a profit for that spin.

Additional Gambling In The Mini-Feature

If any sort of a winning combination appears at the end of a regular spin, players can either collect the prize or try gambling it. Clicking the start button will end it there and lock in all the prizes, while the bet max activates the gambling feature.

At the beginning of the gambling game, four cards are facing down while the fifth is shown to the player. The goal is to pick one of the face-down cards that has the value greater than the card shown at the start. Each correct guess doubles the current prize. Keep in mind that one wrong guess stops the game and everything won in that round is lost.

Even though gambling each prize might sound appealing at first, keep in mind that higher the value of the face-up card, harder it is for you to find the one with the value greater than that.

This risk game is different from the others, where players get to guess the upcoming color or a suite and the chances are not equal. The chances increase if the card shown at the start has a value of 2 or 3, which should be an easy guess. However, there are no guarantees and everything can be lost even if it is theoretically unlikable.

One Frog To Rule Them All!

We can all see ourselves as the frog when we first start playing slot machines, and we only need that one huge winning or a jackpot to give us a “kiss” and fill the balance to the top.

The RTP for the Fairy Land slot machine is unknown, and we won’t make any guesses, but hopefully sometime soon casinos will be able to get that information from the Igrosoft company.

Even though games with the unknown RTP status are not always recommended this one is definitely worth it. Start with the fun mode and see how it goes for you.