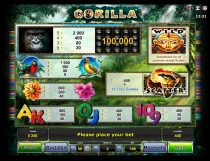 The African jungle ranks as one of the most iconic geographical regions on the earth. It is a place of wonder, beauty, and mystery. Many explorers have spent years traversing the length and breadth of it, from the rainforests of the West and Central Africa to the Congo Jungle and finally to the breathtaking Savannah Grasslands of East and South Africa. It has provided the backdrop for some of the most iconic movies, arcades, and video games that have made an indelible mark on pop culture in the last 3 decades. 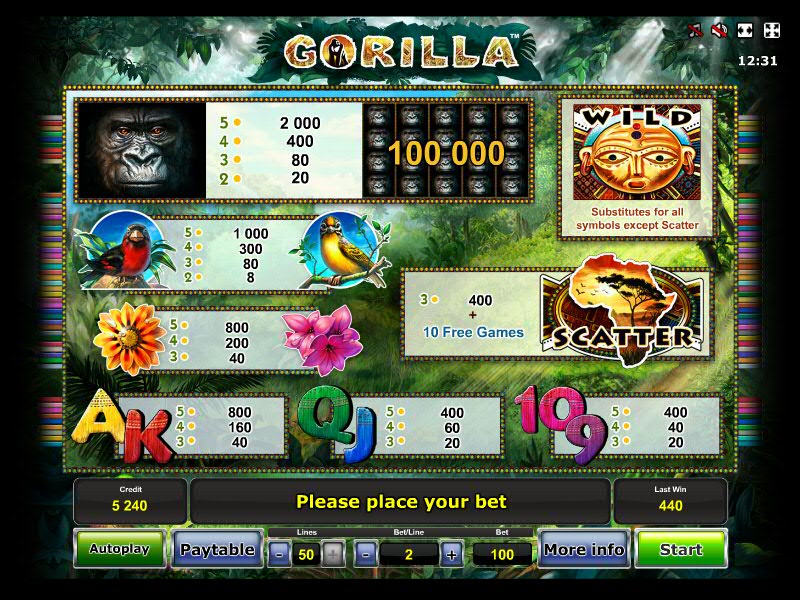 Seasoned slot aficionados know that game developers like to draw inspiration from sources that will add a sense of awe to their offerings. Novomatic, the popular Austrian slot platform did just that in 2011 when they released Gorilla which is a pokie with a distinctive jungle theme. Novomatic has always taken great pride in delivering a different form of creativity that fans of their releases often always find enthralling and Gorilla is no different. The production is action packed, and the background colors are vivid, reflecting the majesty of the African scenery. What’s more, the game soundtrack is primal and energetic.

There are a total of 4 rows of icons on the screen of this particular video slot title. It also features 5 reels, 50 paylines, and unrestricted betting options. What this means is that players can place bets with as little as a couple of cents per line. In terms of credits, the minimum bet per line is about 100 credits with a maximum cap of 10,000 credits per spin. Gorilla has both a base game and a free spin mode with the maximum possible win for both rounds set at 1,000x the player’s stake per spin. The RTP for this pokie is 95.09%.

As far as slot game symbols go, this production has a rich assortment of them. Some of the symbols on display are birds with bright colors, flowers, some letters and numbers, and of course, a gorilla. The wild symbol is a mask while the scatter symbol is a picture of Africa (in silhouette). The mask, which is the wild symbol, can substitute any of the default symbols except of course for the scatter symbol.

Like other releases from Novomatic, Gorilla has both a base game and a free spins round. The base game bears some resemblance to other classic titles like Golden Legend, but the gameplay is impressive.

Landing 5 gorilla symbols anywhere on the reels at maximum stake per stake offers players a massive payout of up to 50,000 coins. Obviously, the mighty silverback gorilla symbol carries the highest payout. The payouts accruable to a player for the other symbols in descending other are as follows: birds, pink flowers, orange flowers, and finally, the usual card symbols.

Here is a look at a few of the pros and cons of this title:

Considering how old this pokie is, it is impressive to note that it is still being enjoyed by gamers, which is a testament to the impressive nature of the game. Gorilla by Novomatic has a great deal of entertainment value with the potential of really big wins.