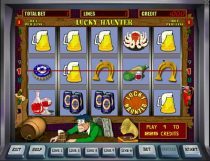 Another one of kind online slot machine comes from a well-known developing company, Igrosoft. One of a kind because it is has also retained that simplicity of hand-drawn style, which is in fact the signature of Igrosoft. Interface and symbols are designed very well to follow the theme of the game, which is set in an old, dusty tavern! Everything is very neat too, with all info placed above the reels and all control buttons below them. At first glance Lucky Haunter looks promising! 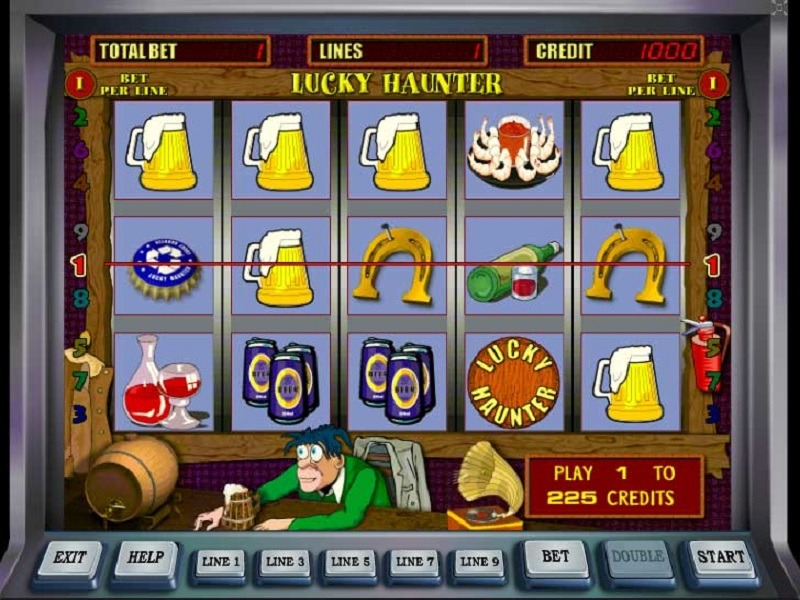 Lucky Haunter is an online video slot developed by previously mentioned company Igrosoft. It consists of 5 reels with 9 paylines overspread across them. The list below contains all other generalities:

Lucky Haunter consists of 7 ordinary symbols plus there are wild and bonus icons. Among those ordinary ones, the symbol of the Lucky Haunter logo is the one with the most worth. If one manages to land five of them on an active payline, he would score the maximum prize of 5000!

The wild is illustrated as a golden horseshoe. It has the ability to substitute all ordinary tokens, except for the Lucky Haunter logo. It also can’t replace the bonus symbol. It has the ability to create a winning combination on its own, carrying the second biggest payoff of 2000 for five of them placed on an active payline!

Bonus symbol is displayed as a blue beer cork.

Three or more of them landed on the reels, regardless of their position trigger the additional bonus round. This “Lucky Hunter Bonus” takes one to a completely new screen displaying five corks. The player needs to pick them one by one using buttons that adjust the number of lines. Every cork picked multiplies the prize by certain index. The round stops when one picks a cork with “Exit” title.

But if one manages to pick all beer corks without picking the one with that title, he would activate another more bonus round called “Super Bonus Game”! New screen opens containing two serving dishes covered with lids. One of them contains a roasted chicken, which multiplies player’s wins numerous times, while the other one contains only bones and it doesn’t carry any prize.

Both of those additional bonus rounds are sufficiently frequent, although that doesn’t mean that one would instantly score some massive payout. But it’s exactly where the excitement lies, isn’t it?

Lucky Haunter online video slot has yet another feature to offer to the players. The developers called it “Start Risk Game” and it is in fact the gamble feature. After each winning spin in the base game, the player gets to decide either to withdraw the money or to start this feature and try to double it. In Start Risk Game one needs to choose one of four shadowed cans. If the value of that can is higher than the value of dealer’s can, the payout gets doubled, but if not, the player loses all spin winnings. If those values are equal, nothing happens and the amount of the payout stays the same.

One response to “Lucky Haunter”