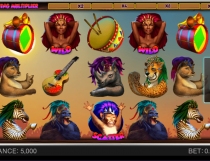 Safari Samba, by Spinomenal, is a slot for those who enjoy a safari-themed gameplay while they rack up the coins. This whirlwind of a game involves graphics that are adequately created to ensure that it does not look out of place or date. The developers of Safari Samba used 100% HTML5 coding to ensure that gameplay is as smooth as butter and can operate the same way on your iOS device because honestly, who wants to play a game with constant lag? 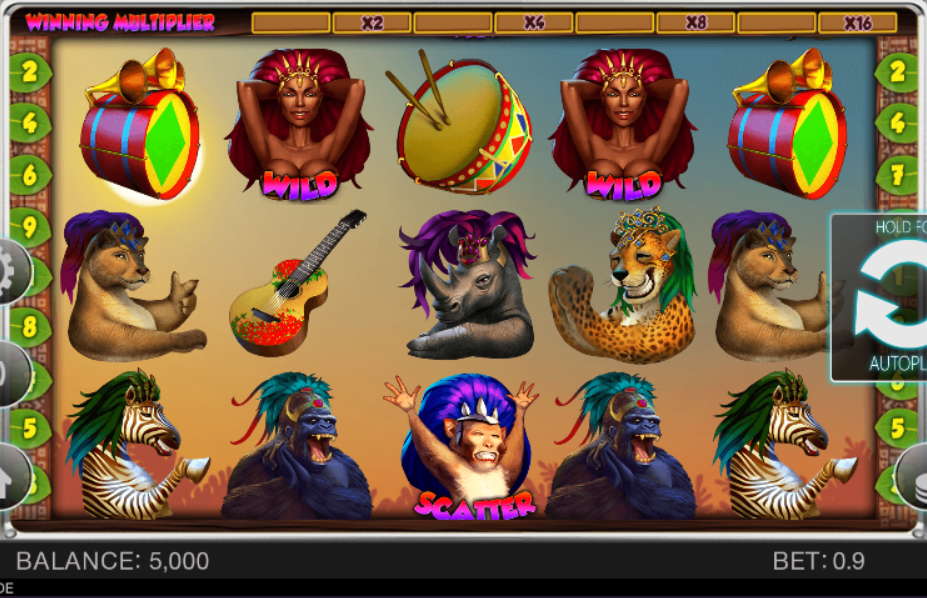 Interestingly enough, Spinomenal, known for their flashy innovation and ingenuity, has taken all of the classic attributes of video slots from simple 2D graphics and used them to create an easy gaming experience. The home screen is also very simple to maneuver around. You have your traditional and familiar paytable, autoplay button and wager management to help make your 9 line gameplay experience as effortless as possible.

Safari Samba features a high speed, easy-to-use 3 reel and 9 payline interface that allows its players to win in multiple ways from just one line on both sides. The rule is that for every consecutive non-winning spin, the multiplier will continue to increase by one. Once you hit that first win after consecutive losses, the meter will reset, allowing you to start over with the multiplier. So essentially, the more you lose, the more of a multiplier you’ll receive once you experience a winning spin.

WIth the maximum normal payout bring 250 for 5 rhino’s, that multiplier can really help you hit it big. The biggest wins from this game can be achieved by triggering the free spin scatter feature. Free spins allow you to save your money and spin 10 times without a bet while multiplying your winnings based on how many symbols you have triggered.

Increase The Odds Of Winning at Safari Samba

If you want to win as much as possible, it’s important to remember that you have more than one bet to place. The maximum bet you can place is 90, which is 10 coins per line at 9 lines and the minimum is 0.1 for a total bet of 0.9. This bet increases your likelihood of winning big and getting even more out of that losing streak multiplier. If you don’t have time to sit there and press the button over and over again, simply press the “auto spin” button and just watch the reels spin on their own.

There are a few in-game bonuses that Safari Samba offers, one of which we already touched on a little bit. However, there’s more than just free spins:

The Safari Samba slot has a lot to be desired for all-around gaming experience. From it’s easy-to-use interface and simple winning bonuses, this game had us playing over and over again for the maximum win. If you’re sick of sitting there and getting 20 here and 10 there, max out your bet. However, if you want to save your coins and don’t like to bet so much, keep it at a low steady bet and hope for that scatter or wild symbol. We happened to check for gameplay abilities on an Android smartphone and were successful. The game ran smoothly and without lag for gaming on the go.