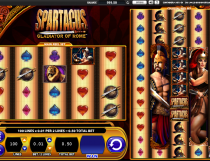 Spartacus was a memorable gladiator who fought in the Ancient Rome with dozens of books and movies devoted to him. WMS was the first company to devote their time and resources into making a slot machine devoted to Spartacus, creating a game titled the Spartacus Gladiator Of Rome slot machine. 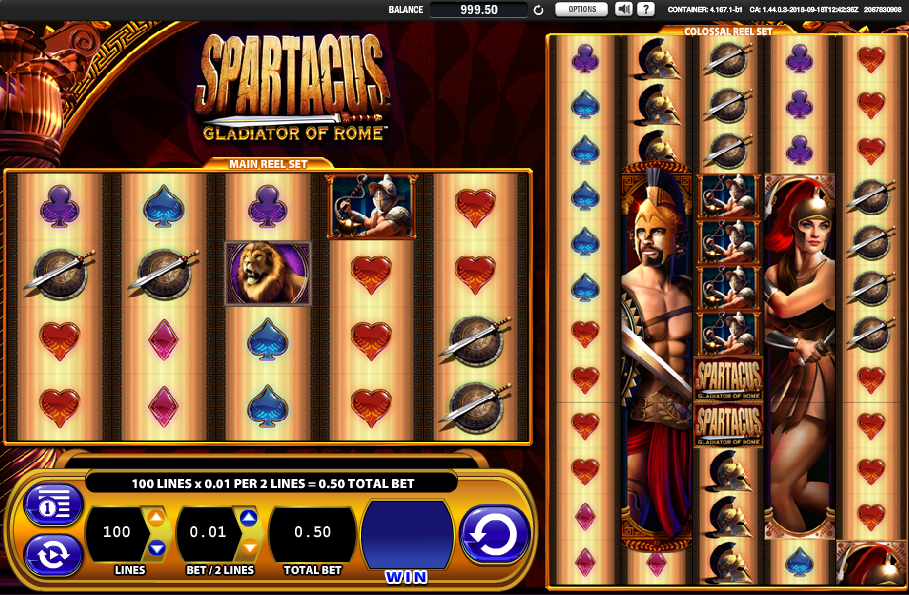 Everyone from the community has nothing but respect for the WMS firm as it exists for over four decades now. The most popular land-based casinos in the world still offer games developed by WMS to their customers, and millions of people can play those and other games online nowadays.

The game is quite unique and different from everything else we have seen from WMS so far, as it has:

Before everything else, it is important to know how these two sets of reels are related, which one is the main one and what to focus on. The reels you see on the right side are the colossal reels that have 12 rows.

By clicking the blue button in the bottom left corner, located above the autoplay option, players can open up the paytable screen. What’s great about WMS’s paytables is that they are not showing multipliers for certain combinations, but instead the real amount you are getting from making it is presented.

This makes it much easier for the beginners to understand what can they expect, and avoids confusion, as some machines mix chip multipliers with real cash multipliers. This becomes even more complicating if the chip to money ratio is not 1:1.

All of the symbols require at least three of a kind on an active payline in order to reward the player. Don’t be surprised when you see that most of the symbols can’t even pay back the amount you’ve spent on that spin with 3 or for matched, as there are two separate sets of wheels, allowing more combinations to occur than usual!

There are two regulars that can appear as stacked, the gladiator and the woman icon, which award x5 and x4 respectively for all 5 signs.

The most important and the most valuable feature in the game is the free spins addition. The reason why it is so important is because it awards the player in two different ways, by giving away an instant prize along with additional costless rounds.

These are the rewards:

Play Spartacus Gladiator Of Rome On Any Device

Not only that the game looks amazing on the PC, but it is also available on multiple platforms and other devices! The gameplay is completely the same for anyone who loads up the game in an official online casino.

All 80 symbol fields, along with all the other buttons and options around them fit in even if the person playing it is using the smallest smartphone screen. This is extremely important, especially for gamblers who are playing the game through the casino’s mobile or tablet application.

The RTP sits at 95.94% which is quite fair for this kind of a machine, where more than just one set of reels is being used. The only mistake you can make is rushing straight into the real money version, before experiencing what it’s like to gamble on a machine like this. That is why the game is available for free in the most popular casinos in the world.