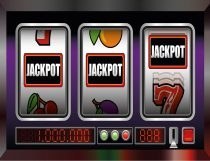 Arcade games very much defined the seventies, but they have been around since as early as the twenties. Even though this era is far behind us, Sharkys Games allows players to relive it with the Swingin Bells slot game.

This slot is not entirely an arcade game, but rather a slot machine inspired by the sets. The pokie machine fits the bill for a true classic with a themed twist, which is what makes it an exciting choice for most players. The demo play and real money game has numerous things to offer behind the retro skin. Most of what is featured when playing Swingin Bells for free and cash is assessed in this UK slot review.

Swingin Bells online slot holds nothing modern in its appearance, and it is entirely inspired by arcade games. The whole game screen is black except for the three by three grid that sits to the right. The nine blocks of the grid are separated using thick bright purple lines while the eight paylines of the game are marked using blue arrows at the top and left of the reels. A couple of details about the slot such as the score, bonus amount, and the title are placed to the left while background tunes only play when the reels are spinning. The graphics and animations of the game are dated with thick pixels that can be found in sets from the seventies.

Even though Swingin Bells online slot spots a dated appearance, it is not sparing with the bonuses it has lined up for gamblers. The Swingin Bells game features include:

Playing Swingin Bells online free slot is done using the grey and blue buttons at the bottom of the screen. Punters can continuously press the Bet button to choose the desired bet between 1 and 50 credits per spin. The Play button starts each round, but no autoplay function is included.

Unlike most other online slots, Swingin Bells game includes eight bet lines that run vertically and horizontally on the play table. Once three characters of a kind land on any of them, a winning is awarded that is then multiplied by the stake value used. The payouts for each icon are:

Cherries are the only items that pay for the appearance of one and two icons, which reward one and three times the placed wager, respectively.

Swingin Bells online slot supports real money gameplay just like it does demo play sessions. To access this version, gamblers have to create an account in a casino that supports the game and deposit some cash. While doing so, it is recommended to claim any worthy promotions along the way. Sharkys Games does not state the RTP percentage of Swingin Bells slot machine. A variance rate is not provided either.

Is there a free version of Swingin Bells online slot?

Yes, there is. Gamblers can play Swingin Bells for free on our website along with casinos that are affiliated with the software developer. The game includes fun credits to use as bets, and the experience is the same as when real money is used. The payouts collected in free play mode, however, cannot be cashed out and only function as wagers.

Can I play Swingin Bells with no deposit?

Swingin Bells free demo version offers the option to play without using any cash. If gamblers are lucky enough, they can run into a gambling den offering the game along with a no deposit bonus. This offer does not require a real money commitment to be activated, but the winnings collected might need players to meet wagering terms before they can be withdrawn.

Is a download necessary to play Swingin Bells slot machine?

The slot is developed in an instant play mode, which means the download of an application is not necessary. The no download nature of the game applies on both PC and mobile gadgets. The game runs directly on web browsers such as Mozilla Firefox, Google Chrome, and Internet Explorer. However, the game does demand the installation of a flash player. This means that it is not accessible to punters using iOS devices such as iPhone and iPad.

The game does include a free spins bonus, and it is dubbed Fever Mode. This offer is awarded when a cross pattern of five bells is created on the grid. Nine bonus rounds are granted in the offer, and they run using the same value as the last played spin.

Swingin Bells slot machine aims at entertaining players yearning for an old-school arcade experience. Experience Swingin Bells free play slot and all it has to offer on our site with no registration or deposit.