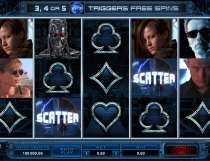 Right around the summer of 1991, Terminator 2: one of the most iconic action movies of all time was released. Those old enough to remember will recall the huge buzz that it generated and how the film became an instant classic that would rule over the imaginations and fantasies of fans for years to come. Till the day, it is regarded as one of the best-made movies of all time with unbelievable action sequences and memorable lines of dialogue. In the hallowed tradition of making slot games based on popular culture references, a slot based on this legendary film has been made. 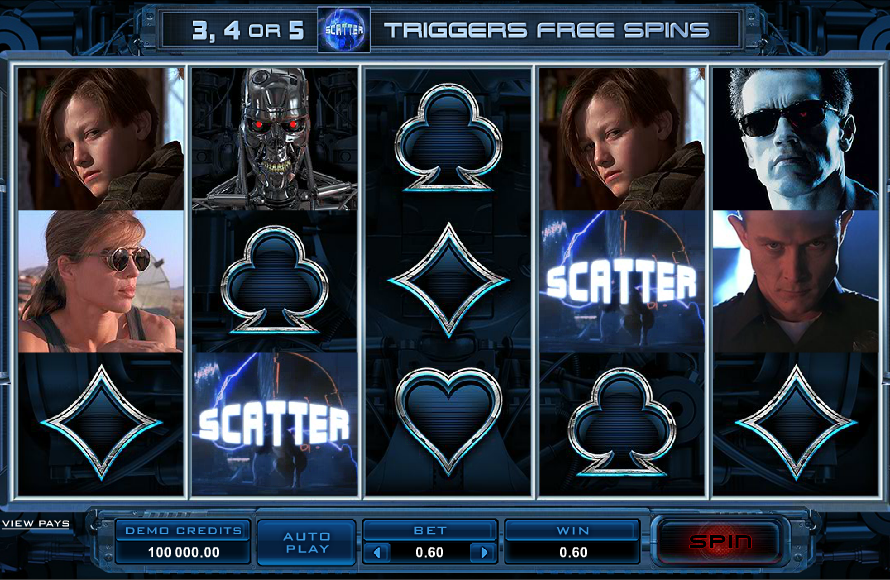 Terminator 2 is the video slot companion to the exciting sci-fi movie with five reels and the distinctive Microgaming 243 ways to win payline structure. Most slot aficionados are familiar with this payline structure but on the off-chance that you aren’t, it quite simple. In order to form a win, symbols that match need only appear on adjacent reels.

Just like the film, there was a lot of buzz and hype surrounding its release. Many have long wanted a slot based on this movie, and when Microgaming began putting out hints that they were developing a Terminator 2 themed slot, gambling enthusiasts couldn’t quite keep the anticipation levels down. It was released in 2014 and became an instant classic, becoming a firm favorite of many online slot players.

Well, it is a slot based on a movie, and a truly popular one at that so it is quite normal for the overall look of the game to evoke the spirit of the movie. Terminator 2 as a movie was a visual spectacle which meant that designers, on the whole, had a whole catalog of shots to choose from as symbols.

There are 5 main symbols in the title which are characters from the film itself. These are – John & Sarah Connor, the T-800 terminator, the T-1000 terminator and Arnold Schwarzenegger. The other symbols are the usual playing card symbols which are for the much lower values. The T2 symbol serves as the wild symbol for the game while the Orb icon functions as the scatter.

In terms of graphics and design, the creators paid homage to the movie by using a minimalistic, yet futuristic palette, with a tinge of the metallic feel associated with the movie. The in-game music is taken straight from the soundtrack of the film, and this helps to further create the authentic Terminator movie ambiance.

How to Win the Terminator 2

This game has 243 paylines in the base game, and hardcore slot gamers know this means that you can use one wager to initiate all the conceivable winning ways. You should be careful here though as 243 paylines means even higher volatility but the potential rewards are quite enticing. Triggering the Free Spins feature causes an expansion of the reels to give the players whopping 1024 Ways to Win.

Just like all other aspects of this game, the Bonus features draw a lot of inspiration from the movie. There is a degree of ingenuity incorporated by the makers of this game in the way symbols are used to represent iconic moments from the film. The bonus features available on the Terminator 2 game are as follows:

If a player can make 3 or more blue orbs (the scatter symbol) to appear on the reels, the free spins mode is activated and the player gets 10 free spins. An interesting thing happens during the Free Spins mode, a new row is added to the reels and this extra row of reels makes it a 1024 ways to win rather than the 243 ways to win as is the case during the base game. During this mode, the T-1000 much like in the movie can transform itself into the image of other characters and players will enjoy the highest possible win when this happens. However, when this occurs, players cannot trigger more spins.

Unlike the Free Spins mode that requires 3 or more blue orbs, the T-800 Vision mode only needs 1 blue orb to appear on the reels in order for it to be triggered. When triggered, any of the major symbols can be targeted to win bonus amounts. Just like in the film, when the T-800 vision mode is activated, the color of the game changes to red.

Microgaming, the creators of this title, have expertly blended the graphics, music, and gameplay of this production as a fitting homage to the Terminator 2 movie. The bonus features are exciting and intuitive. It is quite simply a classic pokie.