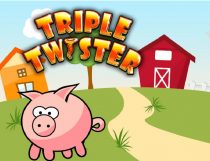 Triple Twister is a 50-payline progressive slot that is powered by the Real Time Gaming (RTG) software platform. Being available with 5 reels and 50 paylines makes it a great game that is worth checking out. The Twister symbol in this jackpot slot is its wild cat, and it only makes an appearance on reel 3 and takes up all the positions on the reel.

Winning combinations that contain the wild card are tripled. The game was released in 2009 and so far has 3,333 coins as its top fixed jackpot. 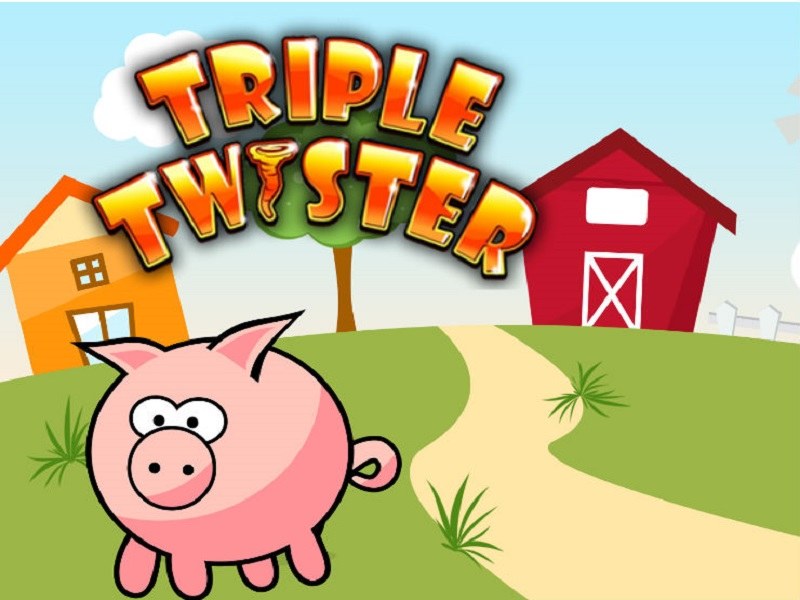 Getting to Know It Better

In a nutshell, RTG’s Triple Twister relays a story of a farmer and his wife who are in a hurry to safeguard their crops and animals just as the tornado approaches.

Twisting It for a Prize

Any game would be interesting and worth checking out only if it presents great opportunities for winning. The RTG’s Triple Twister happens to be one of such games.

To go through the beautiful farmhouse that brims with a myriad of barnyard animals, players will first have to make a decision on their bet. By clicking the button labeled ‘Click,’ the coin denomination varying from 0.01 to 0.25 is changed.

The button that will start the game is labeled ‘Spin,’ while the other one labeled ‘Autoplay’ will spin the reels for a number of times that had been preset without interrupting it. The emergence of three or even more Weather Vanes on the reels will automatically trigger the Triple Twister feature. This action will reward the players with a total of nine free games.

Anytime the Twister appears as the Free Game round is in session, it replicates itself into one or two additional reels, and this automatically increases one’s chances of winning. One great thing about this feature is that it can be reactivated any time.

The Triple Twister’s Progressive Jackpots can be won any time a particular game is coming to an end. The jackpots are randomly triggered. The Progressive Jackpot wins are added to all the other wins. When five farmer symbols appear on an enabled payline, a 3,333 coins-jackpot will be awarded.

Anything about the Bonus? Check This Out

The only feature that players should take a keen interest in is the Twister feature as it can present a lot of benefits and bonuses. Apart from only making an appearance on the third reel and acting like a wild, it will be able to expand on the entire reel, and this gives the player a winning combination. The free spins feature is one of the other ways gamers can lay their hands on huge prizes, which, to some extent, is a bit unusual for an RTG game slot. The wild will make an appearance on the center reel and expand whenever there is a winning line. During the free spins session, the wild will add a couple more whenever it makes an appearance. In a nutshell, the bonuses are:

Triple Twister is definitely one of the most popular games that have ever been produced by the RTG software provider. Although it can give nice winnings, the Triple Twister game can still not compete with some of the most popular RTG games. This is because the winning amounts compared to the bet sizes are not all that promising, but all in all, it is a game that is worth trying.

The RTG’s Triple Twister is definitely one of the best real-time gaming slots that are currently available for gamers. What probably set it apart are its high variance and the high minimum bet that it has.