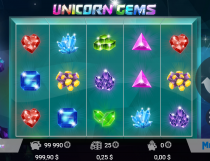 Mr. Slotty is a relatively new software development company, compared to the giants in the industry such as Microgaming, Playtech or NetEnt, all of them being in the game for over 20 years already. 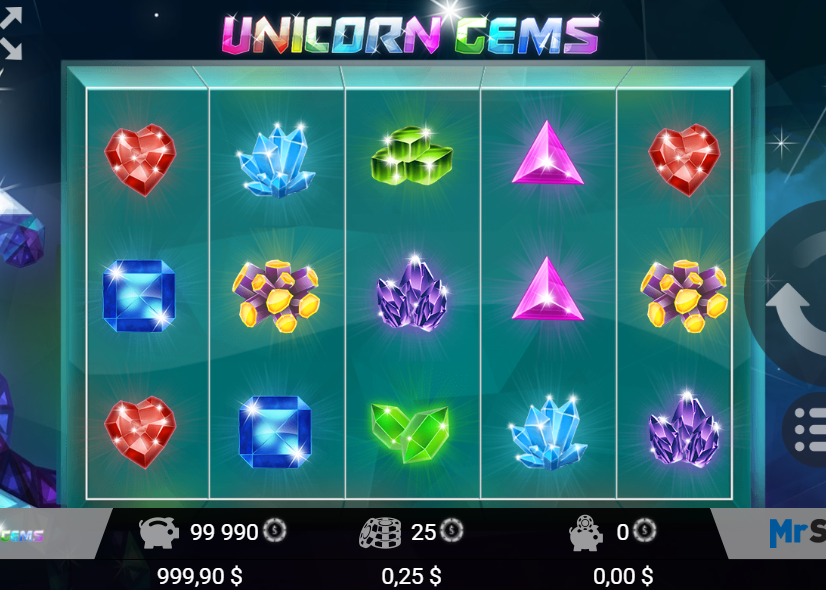 Their interactive and well-designed website attracted hundreds of thousands of gamblers, but what kept them all were the games that they had to offer.

Unicorn Gems is one of their brand new releases, featuring high-quality graphics, futuristic design and 3D animations. Even though the game by itself is pretty simple to play it is entertaining enough to watch the crystals drop on the reels, and players are allowed to stop the reels any time they like.

Any new company that appears in the industry needs to stand out from the crowd in some way, and Mr. Slotty did it by building high-quality and unique products, which people liked a lot. Even if a company does a huge advertising campaign, it is impossible to get long-term customers if the games do not meet all the requirements set by those who are playing them.

The Betting Limit In Unicorn Gems

Being sure that you understand the paytable all the way is the most important thing, especially if it is the real money gambling process we are talking about.

If you click the paytable symbol, next to the reels, you’ll see a grid, where all the symbols along with the numbers beneath them are presented. Even though one chip in the game is equal to $0.01, those number located below each symbol represent the multiplier applied to the amount of dollars placed on each line.

These are the betting limits:

As the paylines are optional, one round can be played for as low as $0.01, while the maximum possible wager for a single spin is $25.00. There are no side-pots or mini-games that allow gamblers to bet more, but there is a gamble feature where players can multiply their prize by x2 or by x4.

There are two special symbols in the game:

Three, four or five scatters award one, three or ten gratis rounds, respectively. Even though the amount of free rolls one can get are not that high, scatters appear very often, increasing the chances of winning more gratis rolls right after the previous feature ended.

The wild sign awards the highest instant money prize in the game, with the x2000 multiplier applied whenever 5 wilds connect on an active payline. That gives all the players a chance to win up to $2000.00 from a $1.00 bet, if they are lucky enough to activate the one with the winning combination on it.

The red regular gem is right behind it, with x1000 followed by the shiny green one which awards x500. Using all the paylines and lowering the bet per line amount rather than doing the opposite is much more effective, as seeing five wilds or any other valuable combination appear on an inactive line is something you’ll think about for days!

Just like everything else in the game, the gamble feature has 3D animations and high-quality graphics involved. Even though it is a good-old card gamble mini-game, it feels different because of the animations.

By guessing the color you can double up the prize, while the right suit will get you x4 the cash you already own. Know when to stop, as one wrong guess and all you won so far in that round goes down the drain.

The machine is perfect for the beginners as there are no complicated features or weird combinations, but also a great one for those who enjoy high-quality graphics and colorful reels!