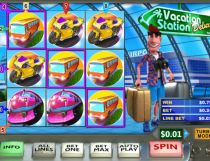 Suit up, pack your bags and prepare to take a very long trip to slots paradise by purchasing a ticket for as little as £0.01 and spin away to Vacation Station – a Playtech powered video slot. The game has perfectly mixed and matched live animations and classy styled reels to achieve a very unique theme that you’ll hardly come across online. Vacation Station Deluxe is the best and easiest way for you to win £400 and have fun in the process! 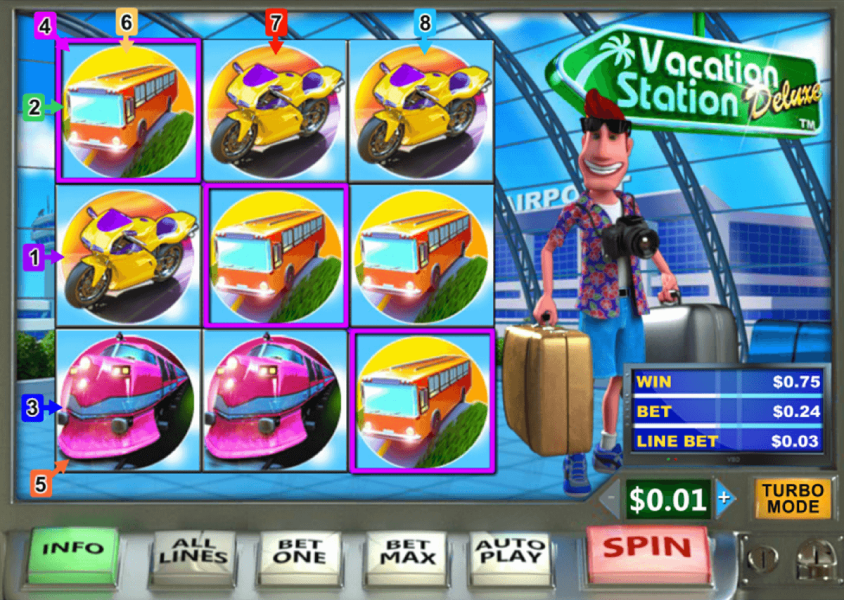 Other might argue that the 3-reeled slots can only bring the good old memories of pub fruit machines, but once you play modern games such as Vacation Station, you’ll realize that they are not really stuck in the past. Behind the retro-looking theme, you’ll take the role of a plucky traveler standing by the side of the screen as the holidaymakers fly in to bring some life to the game.

This ‘Deluxe’ version was developed to ensure players who enjoy playing online that they can also have a feel of what their land based counterparts are experiencing. However, unlike the original game, this modern version features bigger wins thanks mostly to the numerous in-game features such as the wild and scatter symbols, a 3×3 grid – which increases your chances of winning more and a high RTP of 96.37%.

If you are interested in knowing more regarding the same, continue reading our Vacation Station Deluxe review.

Just because the game is classical doesn’t mean that it conforms to the old style of play. On the contrary, it features 3-reels and 8-paylines. It also features a modern 3×3 grid that holds all of the symbols including a yacht, a submarine, a private jet, a container ship, a bus, train, motorbike, and hot air balloon. Matching three private jets on an active payline will reward you with the jackpot (a maximum of £400) while three bus symbols will pay out the least amount (£7.5).

Visually, we can describe the game as having a cartoony theme, with the ever smiling, suitcase-carrying tourist playing the lead role. Bet, spin and win to see him come to life with an energetic dance!

Betting in Vacation Station starts from as low as £0.24 Up to a maximum of £120. The slot is playable in both real money and free mode. Even though you might look at it and conclude that’s its an easy and straightforward game, we highly recommend that you try it out and get the hang of it before starting to bet using real cash.

*Real money and free mode have the same features – including the rules and RTP. You are therefore advised to try this slot at any of the Playtech powered casino for free.

The Suitcase symbol is the scatter and landing at least four anywhere along the reels will trigger the free spins bonus round as well as rewarding you with a 4× multiplier on your bet. Furthermore, if you happen to fill the screen with Scatter symbols, you’ll automatically be rewarded with a 1,000× multiplier.

Unfortunately, the slot doesn’t feature any wild symbols and bonus round but this doesn’t mean it isn’t as rewarding as you’d expect. On the contrary, players can win themselves a maximum payout of £80,000, which is relatively high when compared to what some of the other Playtech games have to offer.

As already mentioned, the game has a flexible bet limit that starts from as low as £0.24 Up to a maximum of £120 per spin. You can adjust this by clicking on the – and + buttons located at the bottom of the screen. All paylines are always active so the total amount you bet depends on the amount you choose for every spin.

Players can also benefit from the Bet Max feature, which lets you bet on the highest possible amount on the screen. The Autoplay feature is also very useful for those of us who enjoy to relax by sitting back and watching as the game unfolds.

If you’ve never been to a trip of your lifetime, Vacation Station Deluxe Slot provides you with this opportunity but you must be willing to spend some cash across the 8-reels of action!