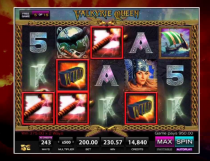 Valkyrie Queen is a modern video slot featuring 5-reels and 243 unique ways of winning. The game has been designed and developed by the less known High 5 Games software developer and features a Viking theme where you’ll be battling the ruthless Valkyrie Queen in a battle field in a bid to win cash prizes and massive rewards. Featuring also in the game are wilds, scatters, free spins and most notably the tumbling reels that increase your winnings.1 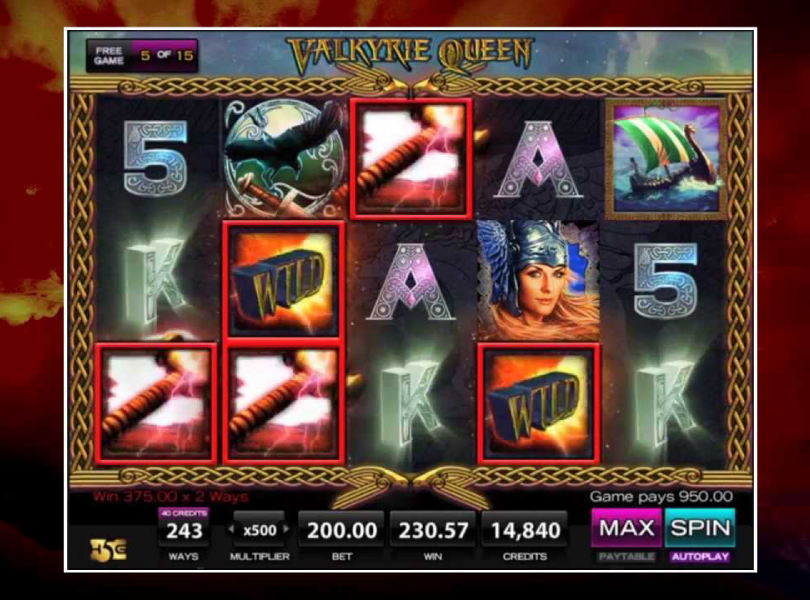 About Valkyrie Queen Slot – An Overview of the Game

Valkyrie Queen is playable on 243 ways. Any ways win must contain one similar symbol from the start to the end of the reel, starting from the leftmost reel. If this symbol or its substitute is located in a different position on the same reel, it will pay the ways win again. Valkyrie Queen will only pay out for the highest win for each ways symbol combination.

Valkyrie Queen is played at 243 ways for a total of 40 coins. You can increase the amount that you want to bet using the innovative bet multiplier button which starts from a low of 0.01 up to a maximum of 3.00. This means at maximum bet, you can spend up to 120 coins. The game pays out according to the paytable.

It is shown by the Valkyrie Queen Logo. It can easily substitute for all the other symbols to form winning combinations and only appears on reels 2, 3 and 4. That’s as far as it goes with the wild and we found it a little bit discouraging because when compared to other games they’ve released before, the wild also comes with multipliers that increase winnings.

The Hawk is used as the scatter symbol and can reward you with up to 10 free spins if it appears anywhere on the reels. In case you land three more symbols during the tumbling reels bonus game, the free spins game will automatically start and reward you with more cash prizes and a maximum of 60 free spins.

Have you played NetEnt’s popular release Gonzo’s Quest? It’s responsible for bringing so much change in slot development by introducing the tumbling reels features, after which other companies such as High 5 Games have also borrowed the concept to develop their games such as Valkyrie Queen.

This feature becomes active once you have got yourself winning combinations. Once you’ve been awarded some wins, all the symbols responsible for creating the wins will disappear to create a void which is filled with more symbols from above (which come tumbling down).

Every time the reels tumble, your wins are evaluated and paid out accordingly. This will continue until there are no more winning combinations.

PS: It’s worth mentioning that the tumbling reels feature can be triggered either during the base game or the free spins bonus round.

Other Payouts in Valkyrie Queen

Matching five card symbols – letters A to K – between reels 3, 4 or 5 will see you receive  multipliers between 5× and 40× your stake. Sink at least 5 of the Queen’s longboats, and you’ll receive a 150× multiplier. We all know how Thor’s hammer is indestructible and as such destroying it will reward you with a 300× multiplier.

Available for Free Or Real Money

Newbies can try out Valkyrie Queen slot for free before betting using real cash. The free to play mode includes all the features offered in real money only that you’ll be using virtual currency. This means players will only win ‘virtual currency’.

Defeat the Valkyrie Queen by determining who lives and who won’t see the light of a new day in a veracious battle and your efforts will be rewarded with generous free spins and tumbling reels!