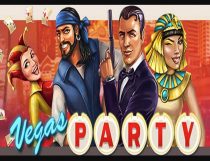 Las Vegas is renowned for offering a gambling experience that is hardly matched elsewhere in the world. Therefore, it is no surprise that online gaming software developers have adopted it as one of the most explored slots themes. NetEnt, being a leading name in the field, has a couple of Vegas slots under its belt, and gamblers can play Vegas Party for free as one of them.

Vegas Party slot game is your average slot machine, and probably not the most heard of. That is because it is created explicitly for the revered online gambling den, LeoVegas. This game is a revamped version of the famous Twin Spin, but with a Sin City twist that makes it a coveted title despite its exclusivity. This Vegas Party demo play slot review looks into what the game has to offer.

Vegas Party online slot abandons the black and blue hues that are used in the setting of the Twin Spin Slot and uses a glittery appearance that matches all Sin City is known for. The no download game maintains the 5×3 grid, but this time, it features a flax shade that is accentuated by the gold rim that surrounds it.

String lights are placed all around, and the UK slot title sits at the top of the reels in a similar style as the Fabulous Las Vegas sign. The scape of the city can be seen in the backdrop with palm trees and casinos lining the streets as the setting sun casts an orange shade on the sky. Disco music belts in the background and chiming tunes are added if winnings are landed on the grid.

Vegas Party online free slot only differs from Twin Spin in the theme it is built around while the payouts and bonuses remain the same. Therefore, the game does not include free play spins. The bonus features that players can expect to land in the game include:

Vegas Party slot game abides by the usual payout tradition of icon combinations found in all other slots. The game features 243 win ways to determine these combos:

The total winning of each combination in coins is calculated in the following way: the value from this table should be multiplied by the bet level. To get the winning is cash, players should multiply the winning in coins by the coin value.

To play Vegas Party online is simple and begins with the selection of a suitable stake of 25 to 250 coins per spin. Each coin can be valued between 0.01 and 0.50 credits. Both Spin and Autoplay functions are included in the high variance game, with the former cleverly designed as a lion pawprint to match the LeoVegas theme.

NetEnt is not famous for creating exclusive slots for gaming sites, but it makes an exception with LeoVegas to provide it with the Vegas Party. The game even features the casino logo as one of its characters to drive the idea home. While playing the title, punters can claim a range of promotions offered by LeoVegas.

NetEnt is considered the most revered of all slots providers across the globe with a solid reputation where entertainment delivery is involved. Blood Suckers II, Dead or Alive II, Dracula, and Fairytale Legends: Mirror Mirror are other games by the developer that players can explore.

Yes, it does. When punters play Vegas Party online slot using actual cash, they are awarded real money wins when payout combinations and bonuses land on the grid. The version of the pokie that offers these payouts is only available in LeoVegas online casino.

Punters can play Vegas Party for free in a range of affiliate websites, including ours, where no cash deposit is required to activate sessions. The demo variation of the game can also be accessed in LeoVegas Casino alongside the real money option. Vegas Party free play online slot comes with in-built credits that can be used to place bets instead of cash.

Is there an app version of Vegas Party online slot?

No, there isn’t. Vegas Party Slot is explicitly built for instant play, which means it runs directly on web browsers available on both mobile and PC devices. Even so, the game requires the installation of a flash player to run, which makes it mainly accessible to Android users. Due to the lacking support of flash technology on iOS gadgets, iPhone and iPad users cannot access the game.

What is the RTP rate of Vegas Party slot machine?

The game features an RTP rate of 96.6%, which puts it on the higher spectrum among other NetEnt video slots. This percentage shows that is the title is relatively generous with its payouts, but it cannot be used to tell the certain winnings that can be collected after playing for some time.

Vegas Party online slot gives players an enticing yet straightforward taste of Sin City, and you can take the ride on our website where we provide the game for free. Access to Vegas Party free game is offered without any demands for the creation of an account or the installation of an application. Once you get the hang of the gameplay process, you can proceed to gamble for actual cash in LeoVegas Casino.