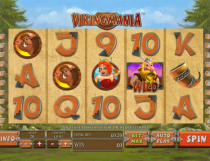 Over the years, we might have been made to believe that the Vikings were some of the toughest and meanest people to have ever lived. They never had a sense of humour and all they did was to conquer empires! The sighting of the Vikings was enough to send shivers down your spin! But Playtech are on a different mission – to show us the other side of the Vikings that’s not quite often talked about – their joyous and happy mood! 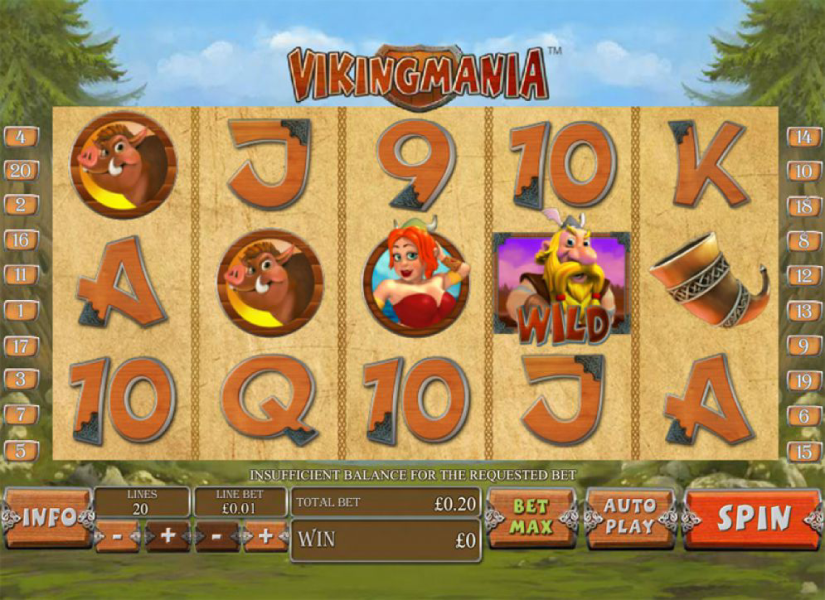 Explore the World of Vikings

Immediately the game starts, you are going to see what I mean. The introductory clip takes you to a world filled with the cartoony Vikings, who are all smiling. The 5-reels and 20-paylines are set against a background of a sunny forest scenarios with symbols such as a horn, a red-bearded Viking, a Viking maiden and a wild boar dominating it.

In addition to these symbols, there are also a wide variety of other symbols that include a map, a blonde Viking warrior, and a massive sledgehammer. However, the most important symbol that you should look out for is the red-bearded Viking, who will award you with the largest payout of 10,000 coins (or £1,000) if you land him on all the five reels. The other symbols also have different payouts as indicated on the pay table.

Having tried the game using the free to play mode, I must say that Viking Mania is best suited for the high rollers, though you can also try playing it if you are out to kill a few minutes. Playtech has chosen to vary the betting range from as little as £0.20 up to a maximum of £100 on every spin, which means that you can bet as much as £2000 on each spin.

*This is too much cash and we highly advocate that you only bet what you can afford to lose because you aren’t guaranteed with a win, even with the game’s high RTP of 94.96%.

There’s pretty very little information that can be said about Viking Mania slot as Playtech decided to take a direct approach to designing it. While its graphics are somewhat focused on the classics, it still fits in perfectly to the modern industry. Most of the company’s focus on this game is, however, laid in the in-game bonus round and massive payout.

The wild symbol, the blonde Viking warrior, plays two important roles in the game. First, he acts as a substituting symbol – replacing all the other symbols except the scatter – to form wins. Secondly, he also acts as an expanding wild, in that he will expand to cover up an entire reel. This not only boosts your chances of winning, but it also ensures you receive massive payouts in the event of a win.

The scatter symbol is represented by the map symbol and is responsible for triggering the free spins game.

The Free Spins Bonus Game and Playtime Bonus Round

As already mentioned, the free spins bonus game is triggered by the scatters. Unlike the wild that has to appear on reels 2, 3 and 4 to complete the winning combinations, the scatter can appear anywhere to reward you bountifully with a maximum of 10 free spins, a 3× multiplier, and an expanding wild.

During this round, you’ll be throwing objects to a Viking pinned to a target. You should be able to see a chicken, an egg, an axe, a hammer and a tomato. You’ll be given a total of 10 shots, and for every successful shot, you’ll be rewarded with multipliers for the original wager.

Overall, I enjoyed playing this Playtech powered slot. The sound effects, graphics and choice of theme have made this game very interesting. I liked how every character symbol has its own unique, engaging animation once it becomes part of a winning combination. There’s also the unique sound effects such as the tooting of the horn and snorting of the wild boar.