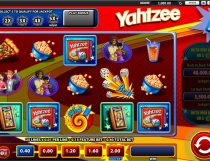 Dice game lovers all over the world, here is a shout out for you. The word Yahtzee is an exclamation that people do whenever something nice happens. So the game is aptly named as that, because it provides you with all the good things. 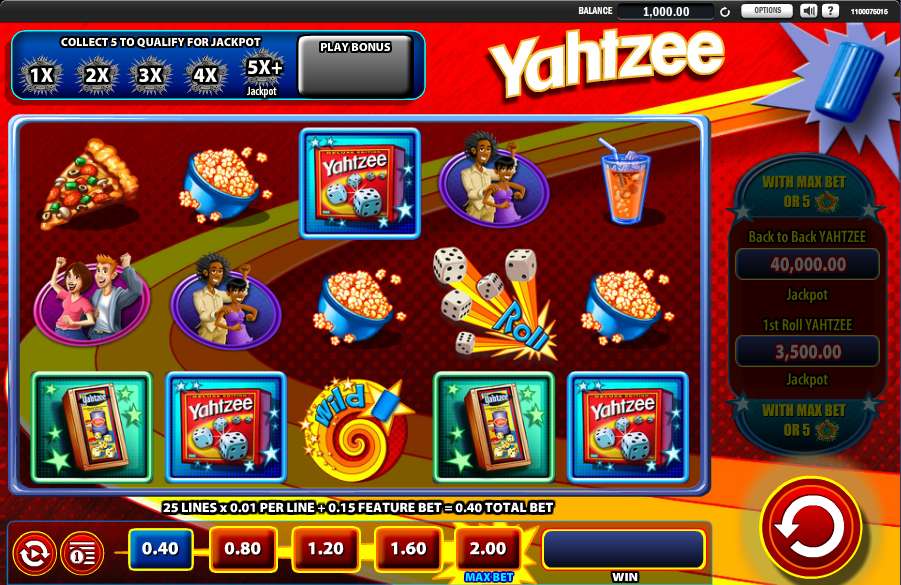 Yahtzee is a game for the people who love board games along with slots. It is a dice game originally created by Milton Bradley as Yatzie, in a game known as ‘Luck – 15 Grand Dice Games.’ It has now become a slot game owned by WMS. It is a popular, established Chicago based gaming company, which manufactures slot machines, video lottery terminals and software used by casinos for managing their operations.

Yahtzee is a party-based game. All the icons used represent drinks, games and people celebrating. WMS has included the festival symbols like pizza, drinks, popcorn and groups of merry making people.

The winning aim of this Yahtzee video slot is to roll the dice three times to get the highest possible combination. And rolling 5 of a kind is called a Yahtzee.

The game is initially set with 5 reels and 25 pay lines as described earlier.

The wild symbols appear on reels 2, 3, 4 and 5. At the top right hand corner when Wild Multiplier Active is displayed, all line wins are multiplied by 2x till 36x-2 dice. The result is multiplied by each other.

The feature bet is activated with the addition of 15 credits. You can select any among the five stake amounts, which are 40c, 80c, $1.20, $2. As with other slot games, you need to get a minimum of 3 similar symbols in a straight line from left to right.

The top 3 payout symbols are red, yellow and cream boxes, which pay 500, 200, 150 coins when you get 5 consecutively. Wild symbols offer real big wins.

The wild symbol looks like celebratory fireworks. The wild replaces every other symbol to give you extra wins. It is a symbol, which appears in a win line. You will be presented with another screen where you will roll 2 dice, which acts as a multiplier for the win.

The Back to Back Yahtzee Jackpot is activated when you roll a Yahtzee after Yahtzee, which results in an amazing 40,000 times your stake.

This game does not have any minus side to it as such. It gives you big wins and an equally good time. It is a good, low limit slot machine. With greater than 40 million of the original board game being sold, we don’t need to have a look at any other figures. The sales figure says it all. Teenagers and adults alike, across the globe grab a bowl of pop corn and are ready to have another enjoyable evening with Yahtzee. That is the power of this classic game.