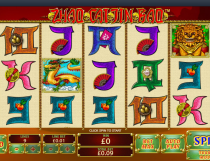 If you want to unwind after a long day of work and stress, you are invited to play the colorful online game of Zhao Cai Jin Bao, which will transfer you to the eastern part of the globe. The graphics will be a treat to your eyes and you will have dragons, emperors, lions, phoenix to play with. The title of the game means ‘wishing you wealth and prosperity’ and that is what exactly is on the platter. 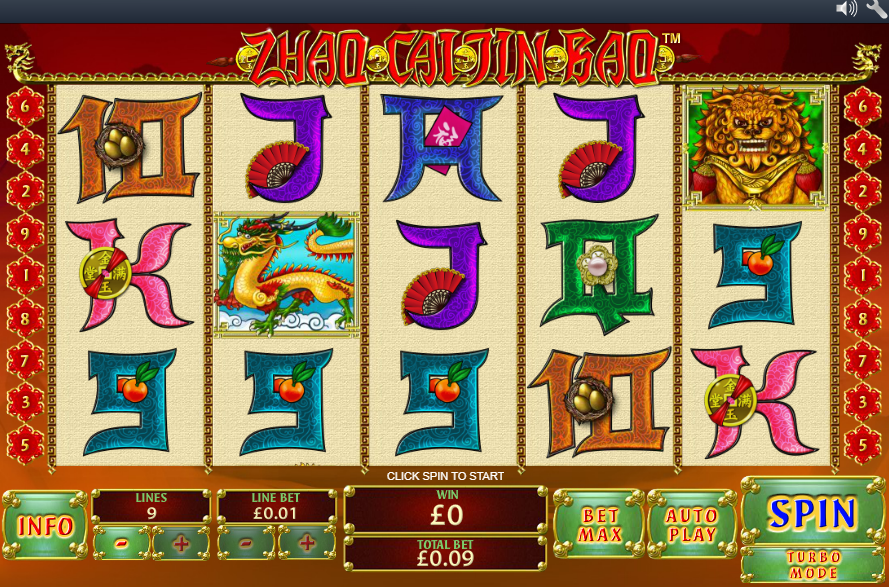 This is one of the slot machines offered by PlayTech, which has recently ventured into the Chinese themed slots. This slot game comes with an Oriental theme. It has 5 reels with 9 pay lines and the point to remember is that these pay lines pay both ways. There are 3 Chinese symbol rows like dragons, fishes and guardian lion. The lower payout symbols are represented by A, K, 10, Q and J.

A traditional Chinese man serves as a Wild symbol and the Scatter symbol is showed as a golden hat.

The game is simple and does not confuse its players with bonus rounds. It gives you a good amount in exchange for a quick spin.

The only goal of the game is to get winning symbol associations with the spin of the wheels.

Like in others, auto play triggers the reel spin. Hover the mouse over an auto play option and select the number of spins you desire. This button too changes itself to Stop in the course of auto play mode. It can be stopped manually or it stops on its own when the selected number of spins has been achieved.

This one has an edge over other games, in the sense they are doubling wilds. The Wilds replace every other symbol as well as the scatter.

Wins are calculated as shown:

On any given pay line, the biggest pay line combination gives you money whereas concurrent winning amounts on various pay lines are collected.

Total win and pay line win is shown at the bottom of the window.

The maximum payout is 10,000 coins, which is huge money for everyone.

Pay by both ways

Although the game is well known for having 9 pay lines across 5 reels, it in fact rewards 2 times the amount. The reason is each line pays wins in double directions, right to left and the original left to right.

Attractive Features of the Game

Cons of the Game